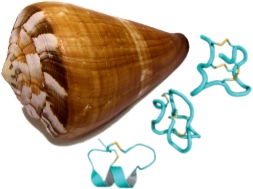 ConoServer is a database specializing in the sequence and structures of conopeptides, which are peptides expressed by carnivorous marine cone snails. A fascinating feature of these peptides is their high specificity and affinity towards human ion channels, receptors and transporters of the nervous system. This makes conopeptides an interesting resource for the physiological studies of neuroreceptors and promising drug leads. Conopeptides are further described here and a selection of recent reviews on the subject can be found here.

Classifications. Conopeptides are classified into disulfide rich (conotoxins) and several classes of disulfide poor peptides. The three classification schemes used in ConoServer, the gene superfamilies, the cysteine frameworks, and the pharmacological families are described and analyzed here.

Statistics. Statistics on the currently known conopeptides are provided here. The statistics include: the relationship between conopeptide classification schemes, the sequence consensus between signal peptides of each gene superfamily, the number of entries for each cone snail species, the characteristics of conopeptides for which a three-dimensional structure was determined, the number of patented sequences, and the journals the most cited in the ConoServer.