The ever-growing interest in conotoxins arises from their ability to target a wide range of receptors (mainly neurological but also muscle types) and ion channels which regulate vital physiological functions with a high degree of potency and selectivity. They may target voltage gated ion channels or ligand gated ion channels. μ-, μO- and δ-conotoxins target voltage gated Na+ channels by acting to block channel pores, inhibiting channel gating (which leads to failure of conductance), and preventing fast inactivation, respectively. Conopeptides targeting Na+ channels seem to be conserved over many different Conus species. Voltage gated Ca2+ channels are blocked by ω-conotoxins and the current drug Prialti, marketed for chronic pain, is the ω-conotoxin MVIIA. κ- and κM-conotoxins exhibit specificity towards K+ channels however the conopeptides targeting these are highly divergent in different groups of Conus species.

There are 2 major superfamilies of ligand gated ion channels, the cystine-loop superfamily (activated by acetylcholine (Ach), glycine, γ-aminobutyric acid and serotonin) and the glutamate receptor superfamily (which branches into N-methyl-D-aspartate and non- N-methyl-D-aspartate). Many conopeptides have been found to target the nicotinic Ach receptors (nAChRs) as competitive antagonists although non-competitive antagonists have also been found. α-conotoxins are by far the most widely distributed nAChR antagonists acting with high selectivity on particular subtypes and being able to discriminate between different isoforms. Most nAChR antagonists in cone snail venom tend to target the nAChR subtypes at the neuromuscular junction causing disruption in neuromuscular transmission which ultimately leads to paralysis of their prey. Antagonists that target the neuronal nAChR subtype may be involved in suppressing the prey's fight or flight response 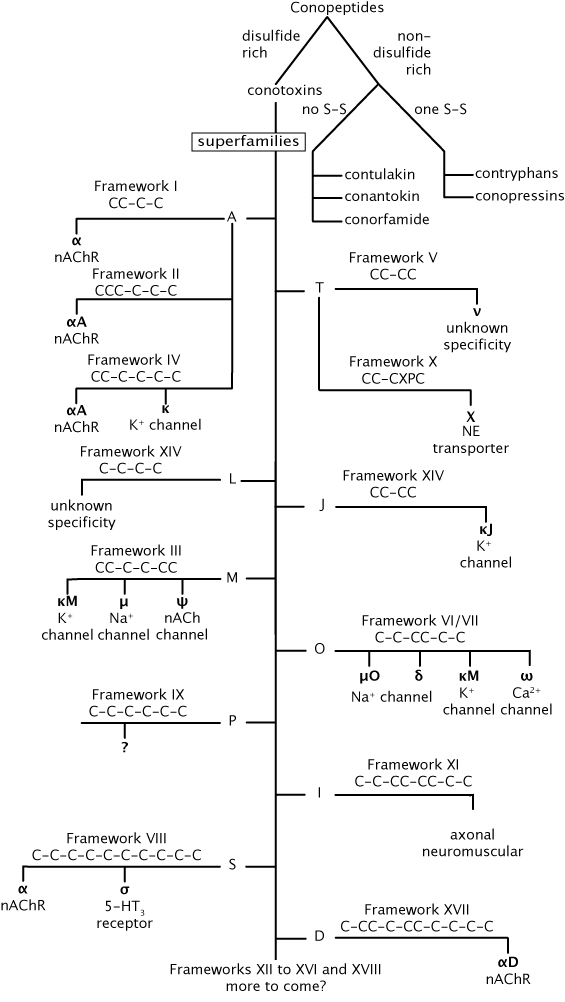 Cystine frameworks for characterized super families of conotoxins and their pharmacological targets.