Conotoxins feature a vast array of post translational modifications (PTMs). PTMs are chemical or structural changes to the residues of a peptide that are not encoded in the peptide gene. PTMs are introduced by specialized enzymes that change the nature of a specific residue. It is believed that the enzymes involved identify their targets by their signal and/or propeptide sequence.

The PTM best understood is the processing of the prepropeptide, which is encoded by the gene, into the mature conopeptide. In this process the N-terminal signal sequence and N-terminal and C-terminal propetides are cleaved to yield the mature peptide with their disulfide connectivity. Cleavage of C-terminal residues may result in an amidated C-terminus, often found in conotoxins. Cleavage of the N-termini of glutamine may result in the formation of pyroglutamic acid by formation of a cyclic amide from the glutamic acid side chain and N-terminus. Other chemical modifications like bromination, hydroxylation, γ-carboxylation or sulfation have also been discovered in conopeptides. 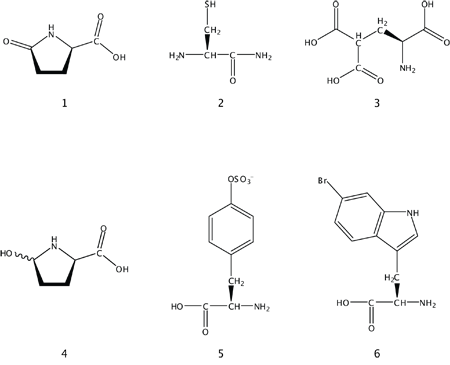 Besides the introduction of small functional groups into an amino acid, PTMs can also introduce large molecules like carbohydrates to the side chain of an amino acid (glycosylation). Additionally, the stereo chemistry of amino acids can be changed yielding D-amino acids instead of the L-amino acid. 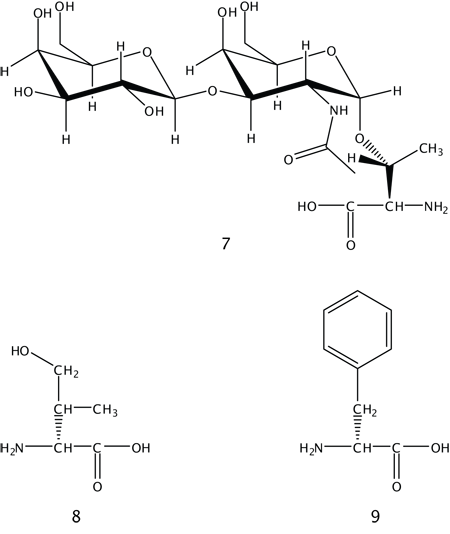 Remark: There are presently no experimental evidence of the occurrence of D-methionine in conopeptides. Two sequences of conopeptides predicted from mRNA have been suggested to contain D-methionine because of a strong homology in a series of D-amino acid containing conopeptides.