The page header of each page of ConoServer features a search bar and a menu giving access to the different pages of the websites, as shown in Figure 1.

The search bar allows users to conveniently search protein and nucleic sequences and three-dimensional structures by name or accession numbers. The menus give access to the different part of ConoServer:

Advanced search pages, accessible from the menu Search, allows users to search entries by name or identifier, sequence definition (alignement with FASTA or exact match), or by selecting different features of the conopeptides. The fields displayed in the list of results can be selected at the bottom of the page. As an example the protein search page is shown in Figure 2. 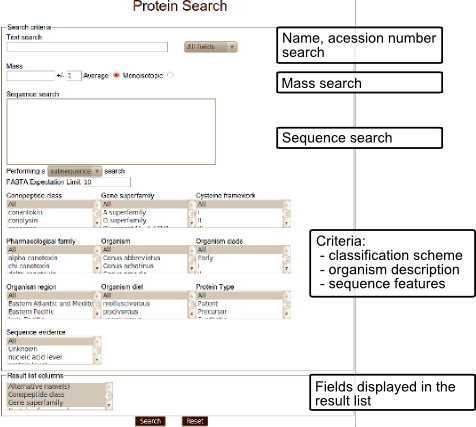 Advanced search for nucleic acid sequences and 3D structures are also available. The "Search menu" also give access to search by using a peptide finger print or to display the list of bibliographic references used in ConoServer. Links located next to each publication give access to the list of the corresponding protein and nucleic acid entries.

Searches performed using the advanced search form or the search bar lead to a table of results that display the selected entries. The field of the table can be customized using the advanced search form. The ConoServer card of each entry can be displayed by clicking on the name of each entry. Several entries can also be selected using the check box in front of their IDs. Using te drop down menu and the Format button at the top of the page, the sequences of the selected entries can be downloaded in FASTA format, aligne using FASTA, classified using the PHYLIP package (phylogeny), or their FASTA alignement displayed using a LOGO representation.

Figure 3: Example of list of results from a search using the word 'MrIA' 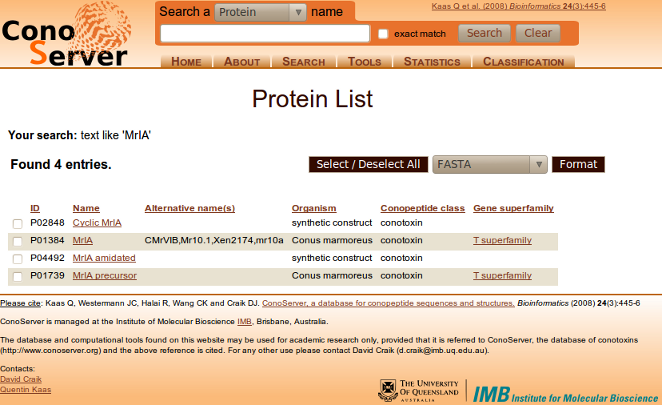 Protein cards display information information on the name and alternative names of the entry. The protein entries can be either a wildtype conopeptide, a conopeptide precursor, a patented sequence or a synthetic variants. General information on conopeptides includes a description of their source organism (latin name, diet, clade and geographic region), a link to their protein precursors and some specific notes. The classification of the peptides according to the conopeptide classification schemes is then provided. The sequence displaying the posttranslational-modifications is displayed and the corresponding masses, isoelectric point and extinction coefficient are provided. If available, the list of synthetic variants and their sequence with posttranslational-modifications is provided. A lits of bibliographic references, which are linked to NCBI PubMed when possible, are displayed. Internal link to nucleic acid cards, protein precursor cards and 3D structure cards are given. External links to NCBI GenBank and UniProt-KB are provided. The sequence of the protein card entry can be submitted to the "Digest peptide tool" that predict the masses of the fragments resulting from the digestion of various enzymes.

Protein precursor cards are essentially displaying the same information but show the signal sequence region and domain regions in their sequence. Links to the corresponding mature conopeptide cards are also provided.

Nucleic acid cards display information on the source organism, the nucleic sequence on which the coding region is highlighted, linked to the encoded precursor cards, bibliographic references and external links to GenBank. The "Analysis sequence" button at the bottom of the page allows users to analyse the entry sequence using the ConoPrec tool.

3D structure cards provide the name and classification of the conopeptide, the experimental method used to derive the 3D structure, specific notes, corresponding bibliographical references, external links to PDB or BMRB, and links to a 3D vizualisation using Jmol and to the compressed coordinate file. The note is especially important to notify if the structure was directly provided by the authors and is therefore not in any other public repository (PDB or BMRB).

The ConoPrec tools perform standard analysis of protein or nucleic acid conopeptide precursor sequences. Sequences can be submitted either by pasting a sequence in raw format in the Sequence text area, or by uploading several sequences in FASTA format using the "FASTA file" tab.

The tool will start by translating and finding the open reading frame of the submited nucleic acid sequence, in the case a nucleic acid sequence was submited. The signal sequence is then identified using SignalP and the gene superfamily identified on the basis of sequence similarity to other members of the gene superfamilies. The boundaries of the mature peptide regions are identified using sequence patterns that describe cleavage sites of proprotein convertases (Table 1), and of two exo-peptidases that are known to act on mollusks (carboxypeptidase E [CPE] and peptidylglycine alpha-amidating monooxygenase [PAM]). CPE cleaves the Lys or Arg terminal residues and PAM cleaves yje C-terminal glycine and amidated the C-terminus. Finally the cysteine framework of the peptide is identified as well as the mature conopeptide with the most similar sequence in ConoServer. Three posttranslational-modifications are predicted, the modification of a glutamine into pyroglutamic acid (always happen if it is the first residue), the C-terminal amidation (if the activity of PAM was detected), and the possible modification of glutamate into γ-carboxylic acids. The last modification is predicted if the precursor sequence match the perl pattern "[KR].{2,3}[ACGILMFSV].{3,4}[KRN]", which was derived by comparing the conopeptide sequences that have been shown experimentally to display a γ-carboxyaltion.

If a single sequence was submitted, ConoPrec will display online detailed information of the analysis, including a table of the similarity to the closest signal sequence of each gene superfamily, the identifcation of the cleavage sites of endo and exopeptidases, the entries in ConoServer with the greatest sequence similarities.

If several sequences were submitted using the "FASTA file" tab, then several files in XLS, TXT and CSV formats are returned providing only the final analysis for each sequence.

The ConoMass tool help identfication by mass spectrometry of peptides that were predicted at the transcript level. The tool is split into two steps: the first step compute the possible modification and masses for each peptide predicted from transcripts (for example using ConoPrec). The second step identify the masses generated in the first step with the experimental data from mass spectrometry.

In the first step of ConoMass, users can submit a single sequence in raw format (for test purposes) or a list of sequences in FASTA format using the "FASTA file" tab. Modifications of the peptides, including reduction and different type of alkylation of cysteines, can be selected. Height possible modifications can be selected (modification to D analogues are not included as they do not change the mass of the peptides). The tool returns several files in CSV, text and XLS format that provide the list of masses for each modification. Submission to ConoMass use a queueing system and the first step job is assigned a session number that can be used to pursue identification of the peptide in mass spectrometry data in the second step.

In the second step of ConoMass, users submit the experimental data file from mass spectrometry and the results from the first step analysis. The experimental mass file can be provided in various format (electrospray, .rtf format, plain text). The users must chose the columns containing the masses, the type of masses, and the mass correction that should be used. Regarding the list of peptide masses computed during the first step, users can submit the output file in plain text format or provide the session number of the first step. The uses should then chose a precision of the experimental masses. The second step return a table (downloadable in XLS, CSV and text format) of the identified peptides, and comparison of the theoretical and experimental masses.

Two mass spectrometry tools are provided for convenience in the "Tools" menu:

The "Tool" menu gives access to a page that allow users to download the data of ConoServer in XML format. The data on proteins, nucleic acids and 3D structures are split in three files. The XML files are updated every day (9am AET).